That Guy’s Wearing Red, Too! by Steve Banner

As a keen sports fan who has lived on several continents, the author thought he had pretty much seen it all from camel races in Saudi Arabia, to ice hockey in Stockholm and Montreal, to the Tour de France, to NFL football in Miami in Dan Marino’s heyday. But it wasn’t until he began to follow the University of Nebraska’s football team that he realized he was witness to a phenomenon unlike anything he had ever seen. Intrigued by the strong bonds interwoven between Nebraskans as individuals, and between them and their team, he set out to follow the Huskers’ 2015 football season and explore the source of their fans’ unshakeable loyalty to the Big Red. From Opening Day through to Bowl Day the author witnessed and reported on every game, either in person or at watch parties with local Nebraska fan club groups in different cities and states. In between football games, he managed to travel to a number of towns in Nebraska where he talked with residents about their recollections of Nebraska life and their favorite memories of Cornhusker football. The result is a book that not only recounts the football season but also captures the essence of what it is that makes Nebraskans and their love for the Big Red so special. 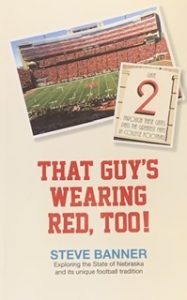 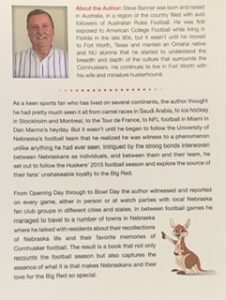