308-624-0386
View cart “Anaiah’s Trip to Space by Anaiah McAway (new book by Springdale, Arkansas author)” has been added to your cart.

“What a Life” The Coney Island Story

Gus Katrouzos has come to know the stories of three generations of Coney Island customers.  Now, at age 96 he has decided it was time to share his own story. A recently released family memoir, “What a life” tells the story of three generations of the Greek immigrant, Katrouzos family and the little lunch room which brought them together and supported them after tragedy.  It also celebrates the role of Coney Island in the development of the Grand Island, Nebraska community. Copies are now available for purchase at the Coney Island just in time for Christmas. On line purchases can be made through Susan’s Bookstore in Aurora. A portion of the net profits from their sale will be donated to the Hall County Historical Society.

The story begins in 1933 when George Katrouzos first acquired the lunch room.  Upon the death of his wife and their new born child a few years earlier, he was forced to place his other children in an orphanage, until he could provide for them. His three children included Gus, his brother Sam and Sister Pauline, who all played a role in supporting one another and the lunch room over the years.  Today, George’s grandson, also named George, carries the traditional menu and personal approach to customers into a new century. George Jr. and his sister, Katherine offer their own personal reflections of the family and business as part of the narrative.

The book resulted from a two year, collaborative effort by three area authors. It also includes an introduction by Bob Hanna, one of Gus’s oldest friends. Hanna is a nationally known artist and architect whose watercolor rendering of the Coney can be found on the book’s front cover.  Authors, Lawrence Molczyk, Jim Dean and Jean Lukesh, were presented with the multiple challenges along the way… Challenges ranging from a world-wide epidemic to their own family health concerns. “But Gus, never wavered in his own enthusiasm over the project,” said Molczyk. “He shared rare family photographs, personal papers and hours of interviews.  When we no longer could meet in person, we moved to the phone.”

The Coney and the Katrouzos family have been featured in a variety of newspaper and magazine articles. The lunchroom has been recognized in publications such as Jane and Michael Stern’s book “Roadfood.” It has enjoyed repeated recognition in the Omaha World Herald and the Grand Island Independent newspapers. The Coney has been featured in magazines such as Roadside and Nebraska life. Numerous references to the Coney Island can be found on the Internet and in YouTube videos.  “What a life” offers the background story of the family behind the Coney Island phenomena.

Proceeds from the sale of this book go towards the Grand Island Historical Society. 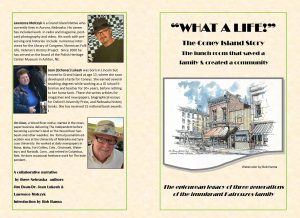 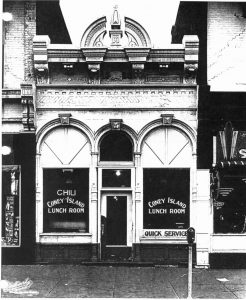 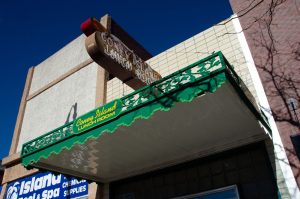